This page is for teachers seeking historical plays for 4–6 graders. These have been performed numerous times in schools throughout the US and abroad.

Loki and the Stolen Apples 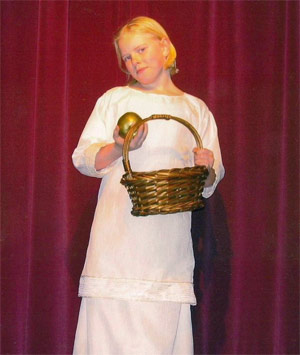 Ancient Nordic mythology comes alive with gods, giants, trickster humor and a fiery climax. Features the song “Danger Winging”, and “Iduna Come Home”, a lament sung by the dying gods. The meter, modeled after the Finnish epic poem The Kalevala from which the characters are drawn, is trochaic tetrameter in rhymed couplets that help children memorize the poetry.

*Can be done with 14 students w/o doubling * Rhymed verse * Detailed stage directions*
40 min. long * Stage sets can be simple or complex

In Asgaard, the home of ancient Nordic gods, trouble follows the trickster Loki. When Thiassi the Giant shows up to settle an old score, Loki finds himself marooned on an iceberg. He is released only after agreeing to help Thiassi kidnap Iduna, the goddess of immortality. Once Iduna has been snatched away, the other gods rapidly age without the daily apple from the tree of immortality that only Iduna’s hand can deliver. Meanwhile, imprisoned in a cave, the defiant Iduna must bear Thiassi’s rage when she refuses to hand him the apples of immortality. When the gods send out Odin’s ravens to find Iduna, they discover Loki’s involvement, and force the brilliant trickster to make another scheme, this time to rescue Iduna.

The Wooden Horse of Troy 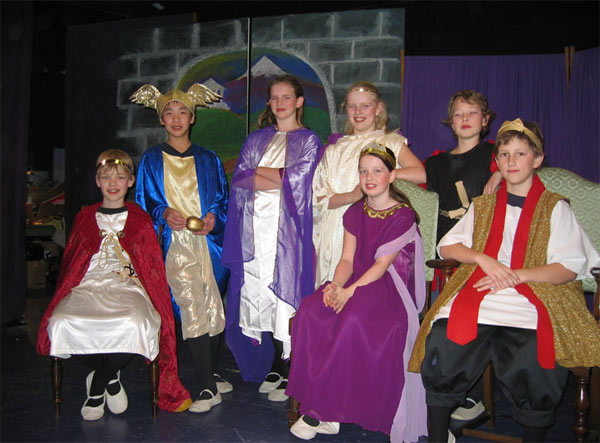 After a golden apple inscribed with “To the Fairest” is rolled by a troublemaker’s hand into a gathering of Olympians, Zeus chooses the mortal Paris, a prince of Troy, to decide which goddess wins the prize. The goddesses each offer bribes to Paris and he chooses Aphrodite, the goddess of love, after she promises him the world’s most beautiful woman. Though Helen is married to the powerful King Menelaus of Sparta, Paris and Helen fall in love and flee to Troy. Princess Cassandra, Paris’ sister, warns that Troy will be destroyed if Helen does not return, but King Priam and Queen Hecuba disregard her prophecy. King Menelaus and his Greek army battle Troy as immortals look on and take sides. War rages for ten years until the Trojans grow complacent. The Greeks abandon traditional military prowess and use trickery—the famous wooden horse—to bring the Trojan war to its dramatic conclusion.

“The Wooden Horse of Troy helped bring history alive for my 5th grade class. The students really enjoyed the rich language and exciting action. The diversity of roles allowed differentiation in ability levels so that every student could shine in his/her part.”
-Matthew Bigongiari grade 5/6 teacher The Village School, Eugene, OR

“This script provided me with powerful female characters, often missing from plays for the grades, and a strong dose of humor. The children were enthusiastic about this story from the start and the community received the play well.”
-Tim Marsden, Eugene Waldorf School, class teacher

The Slave and the Bearkiller 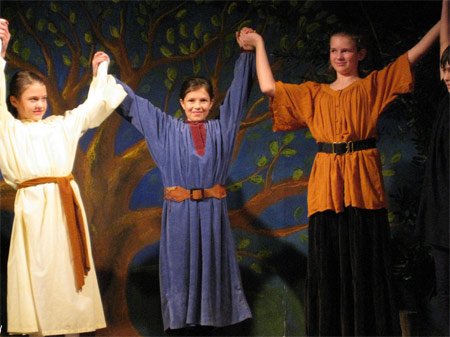 An exciting play about two unlikely friends caught between ancient civilizations at war, featuring Druid ceremonies and the splendor of the Roman Empire at its height. Based on the novel Geron and Virtus by Jakob Streit.

At the height of the Roman Empire, a group of young soldiers strays too far into Germanic territory and is ambushed. Virtus, the son of a Roman general, is enslaved by the cruel Wugo. Meanwhile Geron, a teenaged German who lives nearby, kills his first bear in a hunt that leaves his father badly injured. Pressed to finish his family’s new house before the coming snow, Geron borrows the newly-captured slave Virtus. As the two teens work side-by-side, they become friends, and Geron is torn between loyalty to his family and his desire to help Virtus return home. When Virtus promises that his wealthy Roman father will pay Wugo a ransom, Geron secretly leaves home to return Virtus to his family and bring back the ransom money. Geron encounters the “modern” Roman world and is equally dazzled and puzzled, particularly by Roman relationship to the gods. He returns home to charges of slave stealing, and must convince Druid judges he is not a criminal— or face his family’s ruin.

“If I had three hands I’d give “The Slave and the Bearkiller” three thumbs up!”
-Julian Mullins, 6th grade student playing lead role of Geron

“The dramatic ambush in the opening scene pulls the audience into the story. The slight romance in the story appeals to the 6th grader. This play highlights the contrast between the ancient Germanic pagan culture and the highly civilized culture of Rome. Students experience the strong contrasts that resulted in conflict, yet, through these characters, are able to see the redeeming qualities of both worlds.”
-Tricia O’Neill, class teacher, Eugene Waldorf School