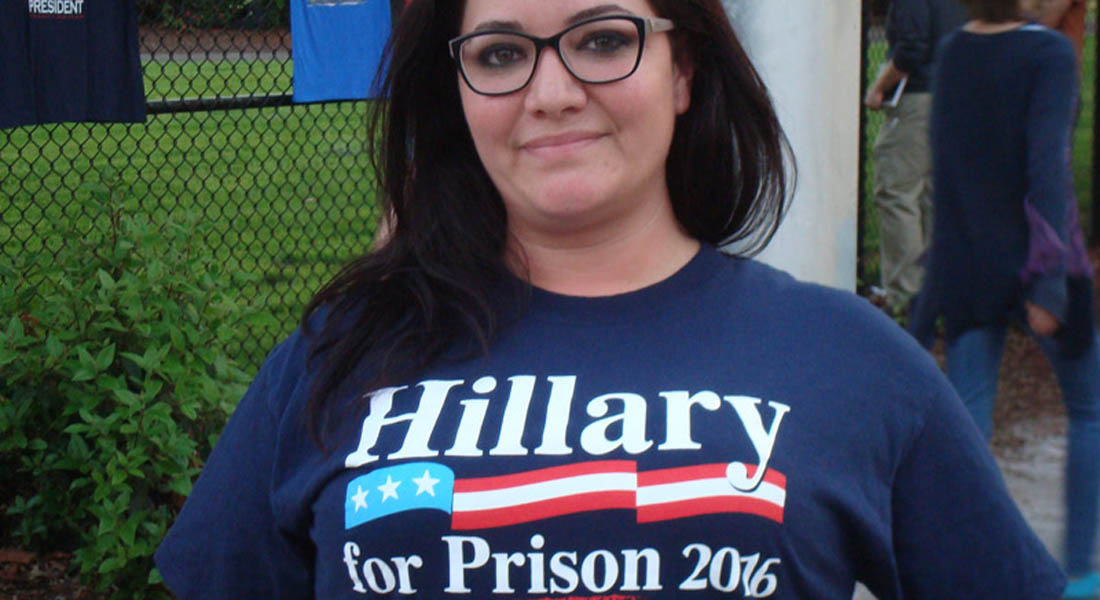 Trump supporters’ T-shirts and signs scream out the vulnerabilities making Hillary–and her husband–dangerous gambles for Democrats desperate for a winning nominee.

My first instinct was to join demonstrators outside Trump’s Eugene rally, but since protests only fuel his fire, I decided instead to reconnoiter, look really bored, and try not to get beaten up. Wearing the 350.org shirt that outs me as a climate activist, I left the nice local cops at the gate and gave myself over to Trump security inside a “private” (read free speech-less) venue. The line crawled past monster trucks that flew giant Trump banners, and vendors hawking “Hillary for Prison” and “Trump that Bitch!” T-shirts. 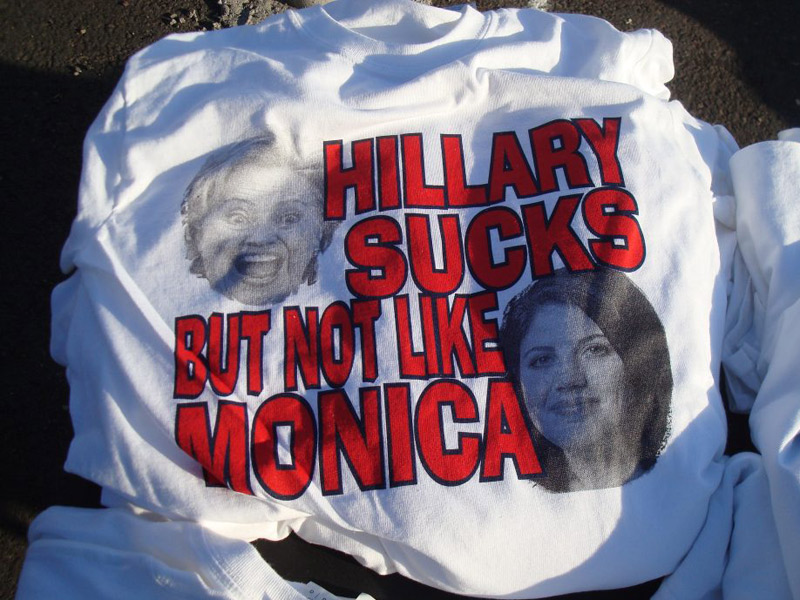 I entered the main hall just as the billionaire mesmerizing my country began to rant. He was fascinatingly appalling, like the town drunk who shows up in church pantless and swinging an Uzi. Two dozen cameras piped every second of it straight into millions of voters’ brains.

After thirty minutes, I was more terrified than I’ve ever been in my 40–year quest for peace, justice, and environmental protection. Because this guy may actually beat Hillary. 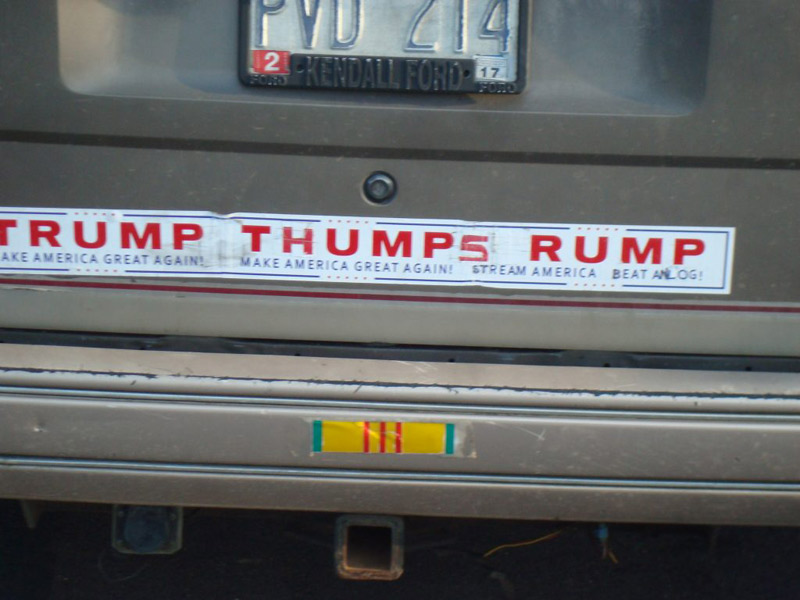 Trump brought up Bill’s affairs, calling Hillary a “nasty, mean enabler” and insisting that “what she did to a lot of those women is disgraceful.” On the surface, he criticized her as vengeful, but he was more likely declaring open season on the Clinton sex scandal. Hillary supporters like to believe it’s a non-issue and I want to agree, but Trump supporters’ T-shirts told a different story: “Hillary sucks, but not like Monica” or “Trump likes women–but not like Bill does!”

Tackiness aside, these slogans offer useful peeks into voters’ minds and point to a grim fact Democrats must face: In a no-holds-barred Trump campaign, “Slick Willie” will plague Hillary as “Swift Boat” plagued Kerry. Only unlike Kerry’s heroic act successfully twisted against him, Bill’s indiscretion and subsequent lies about it are so well documented that Congress impeached him. 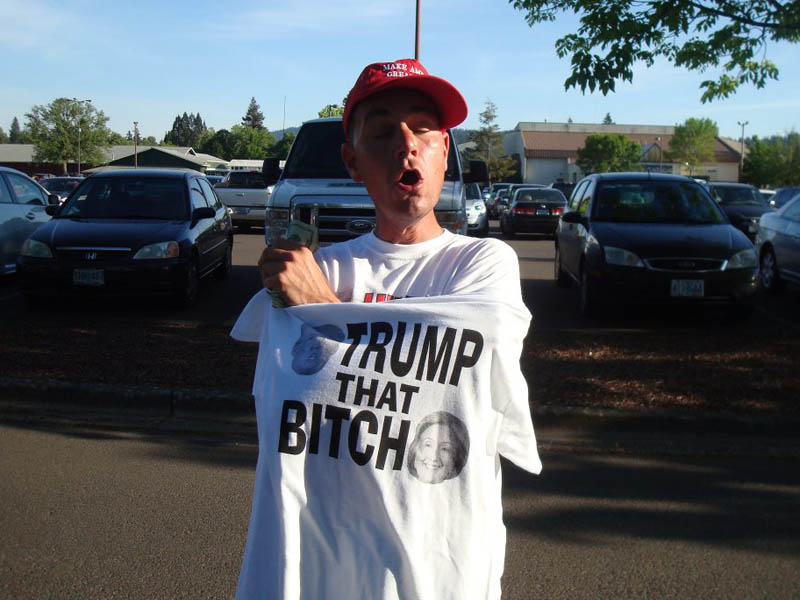 Within minutes of Trump throwing out his line, media pundits took the bait: Did Hillary punish Bill’s lovers? Or is she a valiant survivor who suffered publicly from her husband’s shenanigans? And can her response out-Trump Trump? (It didn’t. There wasn’t one.)

But the most chilling moment of the rally, for me anyway, came when Trump jabbed a finger toward journalists and yelled, “Look at them! They’re horrible people!” The crowd obediently looked and booed. Some joined him in pointing. 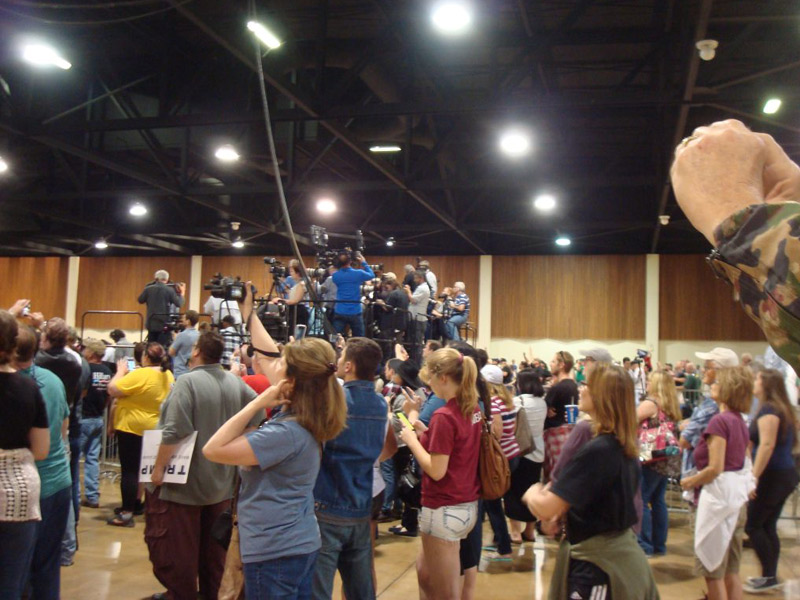 Tears sprang to my eyes. He’d made individuals in the room less than fully human—as Hitler and other tyrants have done—and his supporters loved it. Worse, he’d villanized the very people fueling his meteoric rise and they hadn’t shut off their cameras—as most self-respecting human beings would have done—and gone home.

Because they couldn’t. The media is trapped in the horror show and will go anywhere with the Donald.

I left, along with dozens of others who streamed out the back, before he finished.

Stakes couldn’t be higher. With humanity driving the climate to the breaking point, the next president must lead the global transition off dirty energy and onto clean or it’s pretty much game over, at least according to climate experts (the real ones). I exited past “Bomb the HELL out of ISIS” button booths, stunned that the fate of the earth—of my own children—may rest largely in the hands of a guy who dismisses global warming.

Democrats must answer—honestly—one critical question: Which of us can beat the guy who has thrashed every Republican contender, none of whom were being investigated, as Hillary is, by the FBI?

Before accusing me of divisiveness when I shout “Bernie Sanders,” consider some facts: Hillary’s lead keeps shrinking. Trump’s keeps growing. Mainstream media has wrongly underestimated both Sanders and Trump all along. And if Hillary isn’t indicted over those emails, she’ll certainly lose support when Trump wonders aloud if ISIS hacked her during those months her account may have been vulnerable to snoops.

Democrats must confront the truth that Hillary—and her husband—are increasingly high-risk gambles, especially in a media circus playing itself out on Trump’s terms.

But, as one small green Jedi once famously stated when all hope seemed lost, “There is another.” Vote Sanders in Oregon’s primary. Then join him in asking super-delegates to nominate him, a solid progressive and likable guy who fares far better than Hillary in every head-to-head poll against Trump.

A Sanders nomination may be the only thing between us and President Trump. It may also offer, finally, a shot at repairing our broken democracy. 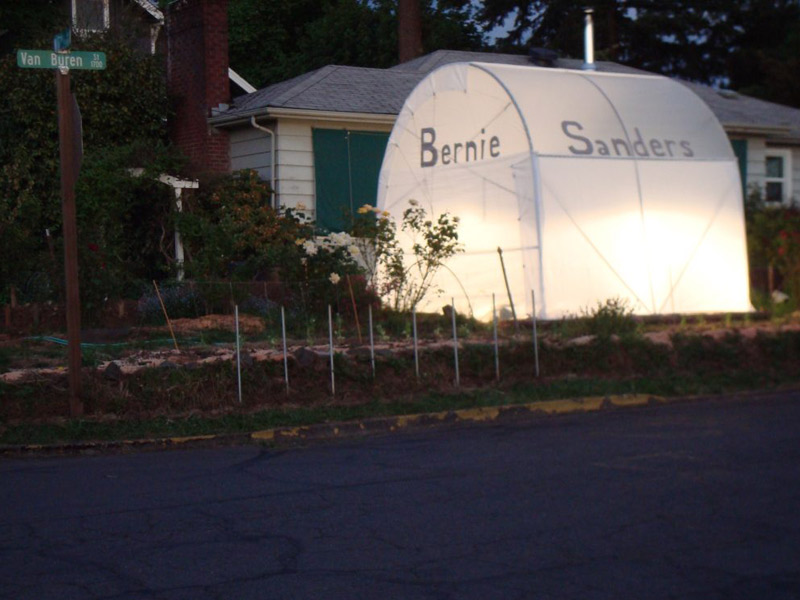 Near the fairgrounds on the night of the rally.