Scared of jail. Terrified of the alternative. 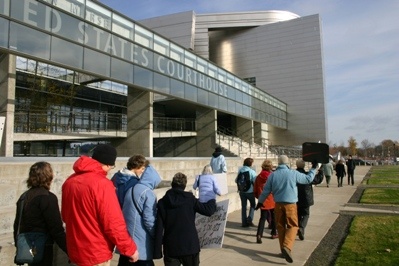 Last Wednesday at the Eugene Federal Building, I delivered, along with two dozen other climate activists, a letter to Those In Charge. What did I write to denizens of the shiny behemoth that seems better suited to the Death Star than to our liberal hamlet?

Well, it was an “On Notice” letter. That’s right, I gave those Feds a warning. If, our letter said, the State Department decides the Keystone XL Pipeline serves U.S. interests— despite all scientific evidence firmly to the contrary— and  then suggests Obama approve it, 60 local citizens will head to the Federal Building. We’ll block the doors with our bodies—peacefully, non-violently—and demand that President Obama reject the pipeline.  We’ll state, one after another, reasons normally law-abiding citizens cannot bear to let that carbon hog get built on our watch. And we’ll keep patiently explaining until police force us to stop.

Honestly, I’m torn about all of this. I’m scared of arrest. Someone I care about is in jail and his experience is relentlessly demeaning, exhausting, and jaw-droppingly unfair. Plus, jail is actually expensive. Did you know you’re charged for that white hot dog bun breakfast?

So why the hell am I taunting these people I’m afraid of, announcing, “Look out, you, or I’ll be back so you can slap me in cuffs”?

I mean, I really hate being cold. My hip aches for days if I forsake my pillow-top. No one else I know carries an inflatable pad to battle all those hard seat around town. Why not let the other 96,000 American citizens who committed to risk arrest carry on with their scofflaw antics without me?

Because the alternative terrifies me. One look at the typhoon’s carnage in the Philippines—or, last year, Sandy’s aftermath on the east coast, or the inferno that was Colorado three months ago—and I see a future far more frightening for my children than a few days with Mom  behind bars. Haiyan’s victims are starving, ill, thirsty, injured, and grieving their 4,000 dead. It was the worst storm to touch land.

That’s no freak of nature any more than Superstorm Sandy was your run-of-the-mill hurricane. This is human-caused climate change and it’s past time to stop belching carbon. Nature’s message is clear: The atmosphere can’t afford new fossil fuel infrastructure—especially the Keystone Pipeline, that will, as NASA’s Dr. James Hansen stated, ignite the “fuse to the world’s biggest carbon bomb.” 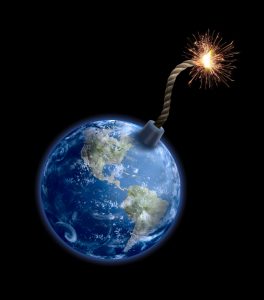 Maybe the State Department will listen to scientific consensus that Keystone is a planetary disaster.  If not, U.S. citizens might convince Obama that he has the backing to disappoint Big Oil anyway. Then I wouldn’t have to shiver in a lightweight orange jumpsuit.

But if there’s failure on both fronts, I’ll leave my cozy fire and join the group of local activists—60-strong and growing weekly—who may have to head downtown soon. If you want to support us but don’t want to eat those hot dog buns yourself, come stand on the sidewalk.  And, using your most-polite voice, ask those cops to be gentle with your sensitive friend Mary.

CREDO, my phone company,  if you can believe it, is the one orchestrating this national campaign. (Run from pro-corporate Verizon while you still can.) To join our Eugene group, sign up for the training: stopkeystonexlnow@gmail.com.

To join more than 60 Corvallis activists who have trained for their own action, contact:http://350corvallis.org/nokxl/

Singing in 3-part harmony while On-Notice letter is delivered.