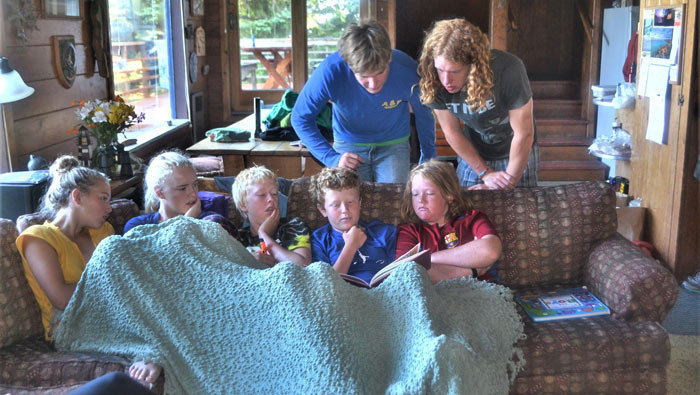 Nothing has been harder in our parenting than dealing with screens. When they were young, I battled—or just tried to avoid— TV screens in medical waiting rooms, computer games during playdates, and movie-binging at family reunions. We negotiated a lot with other parents, and did our best to keep things lively and movement oriented at our own house (think indoor basketball and pillow fights).

Things really got tough when smart phones began to show up at playdates attached to my kids’ friends’ hands. We were—and still are—stricter than most parents on this front, because we see no need to hypnotize children, especially during their once-in-a-lifetime chance to develop great coordination, imagination, and personal agency. The virtual world isn’t going anywhere, and they’ll be stuck with it for decades to come. Why not gift them with freedom from it during the only years you’ll be able to—when they’re little?

If you need more convincing by Real Experts, check out the studies about how digital entertainment overuse is changing our children’s brains (no, not for the better). They’re cited in the excellent books Wired Child by Richard Freed, Ph.D. or Reset Your Child’s Brain by Dr. Victoria L. Dunckley.

Or check out the 2016 study, “Effect of Early Adult Patterns of Physical Activity and Television Viewing on Midlife Cognitive Function,” that links TV watching in early adulthood to loss of cognition in mid-life. Yikes. (And thanks, Mom and Dad, for limiting our TV time way back when!)

If you’d like tips on reducing –or heck, largely eliminating—screen time, especially for the under-seven set, read on:

First: Ignore studies promoting screen time. Seriously. Cover your ears and “la-la-la” if you must when friends quote them, since tech entertainment companies fund many of these studies to confuse parents and keep everyone buying their products. Just like tobacco companies did. Just like Exxon does. Misinformation works. Kids need movement, reading time, and free play. Period.

Third: Trust that screen-limited kids aren’t disadvantaged later, as many parents fear. My kids were mostly screen-free before high school, and they’re tech proficient, getting good educations, and usually beat me at Rummy. Sometimes delaying screens requires both compassion and creativity, such as when my son wanted to inhale the Star Wars universe so he could not feel like a dud during playground conversations at school (we hadn’t let him watch the movies yet). Our solution? One of those DK visual dictionaries, free from the public library. He studied that thing until he knew every character, costume, and backstory as well as any kid who’d watched the movies a dozen times.

Go ahead, delay those damned screens. When you’re ready to let them into your kids’ worlds, retain your parental authority to limit them as much as you want to, because you’re in charge of your family’s health and culture. I promise, your kids will be fine. Any probably thank you someday (yes, ours have thanked us).

Kids in school: With another parent, ask your child’s principal to limit online homework and especially Facebook groups for school or team information. Bring back handouts (on recycled paper) and parent emails! And for heaven’s sake, end kid cell phone use in classrooms (teachers increasingly ask students to access the internet on their phones during class).

Kids under seven: Avoid screens as much as possible. Movie theaters, too. Really. I know, it’s harder than it was years ago when I was raising very young children and no one had internet in their hands (as I do now). But if I were doing it today, I would do just as we did then:

Keep adult computers in a separate room so family spaces with children under seven are screen-free. Adult phones can be kept quiet, out of reach, and discreetly used. I still rarely give my cell number to minimize cell use.

Don’t buy a TV. For movie dates after kids are in bed, get a portable screen to link to computers, but keep it tucked away. Our big (to us) screen is a bit of a pain to get set up–which we like, because we probably stare at it less often as a result.

Ask babysitters, and other parents to support screen-free activities.

Kids under seventeen: Delay and limit gaming. Avoid kid smartphones and data plans until college (when kids pay). My kids have dorky phones, but we can afford them. Having dork phones isn’t just cheaper; it means less screen allure. When they’re older, they’ll get better phones for the **great** features. But most kids still at home—especially young ones—really, really, really don’t need smart phones. Dork phones work fine for the electronic leash we parents like to have when our kids are out roaming the world.

Set your computer not to auto-play the next YouTube after you watch them. Good heavens, it’s nuts, right?

Kids at home: Use routers to limit screen time; program it to pull the plug after a certain number of minutes daily, to switch off before bedtime, and to filter content. Make it easier to be off screens than on. Designate screen-free zones and times. Stock your home with books, magazines, games, sports equipment, art supplies, alluring cookbooks, and friends. Don’t subscribe to movie channels or services. It’s just too easy to veg instead doing all the things humans have done for millennia—cook, talk together, play games, stargaze, knit, exercise, play music, stare at the fire, or devour great books.